Home Learning Center Fred Trying To Get Its Second Wind, Invest 95 Gearing Up 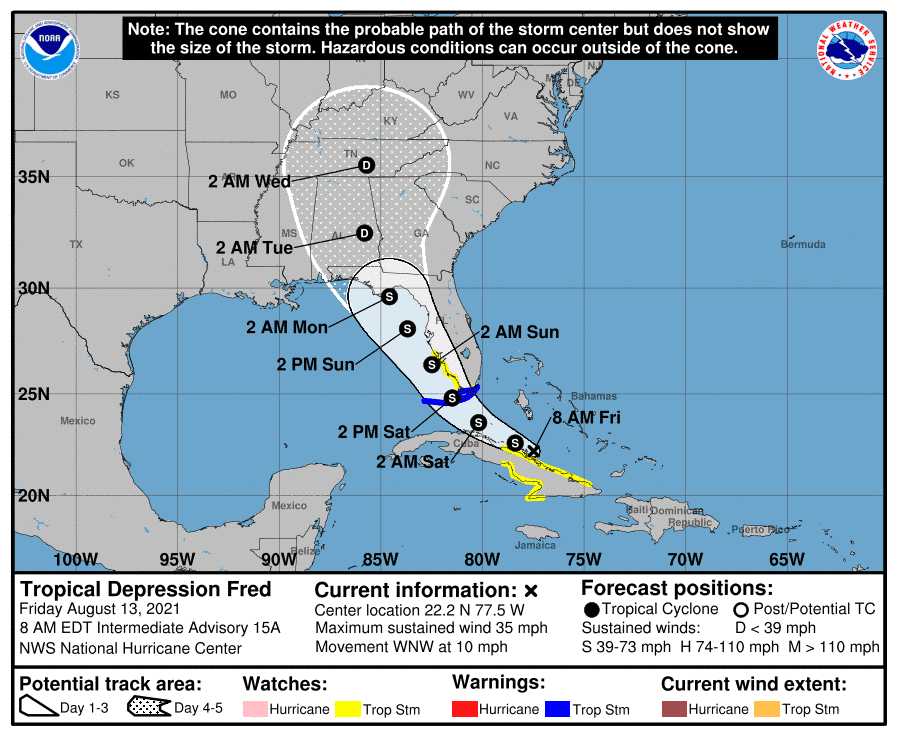 Fred likely to make landfall along the Florida Panhandle

So we have two areas that we’re watching currently.

1:  Tropical Depression Fred has winds at 35mph and is headed WNW at 10mph.  Fred is a little beat up after crossing the Dominican Republic yesterday.  Fred is skirting the coast of Cuba, which is preventing it from redeveloping much for now.  NOAA still expects Fred to start pulling more northward by tomorrow, which would put it over open waters.  This could help it gain some strength as it skirts the southwest Florida coast and heads towards the Panhandle.  Landfall is still forecast to be a tropical depression or tropical storm in the Panhandle early Monday.  For now, Fred has a lot of work to do to get going again.  Keep watching.

2:  Invest 95 is now at an 80% chance of developing in the next five days.  Models are still on the fence with this system.  Some develop it, while others keep it weak.  For now, I95 looks healthy, and I expect we could see at least a tropical depression form in the next few days.  From there, the track is hard to pin down.  If 95 takes a more southern track, we could see a much weaker system pushing through the Caribbean.  If 95 takes a more northern track (missing the Hispaniola), then we could see a much much stronger system that could get very close to the East Coast.